Central to the Yao religion is ceremonial paintings. The Yao retain strong visual images of their Taoist pantheon through their possession of "god pictures" called mien fang. At the summit of the Yao pantheon the fam t'sing, the "Three Pure Ones"(To Ta, Yen Si, and Leng Pu), are assisted by Nyut Hung, the Jade Emperor, and Seng Tsiu, "Master of the Saints". Beneath these powerful figures are a series of lesser celestial beings, including various warrior gods, nature divinities, and the lords of hell. These icons, which are often finely painted, are regarded by the Yao quite literally as the abode of the gods.

A complete set of 17 paintings contains the entire Yao pantheon and is essential for presiding over rituals of purification and the righting of wrongs. During the one to two months it takes to complete a set of paintings, the artist must work in an atmosphere of religious devotion and ceremonial purity. When the work is finished, the painter himself ‘opens the eyes’ of each character according to the Chinese custom for consecrating Taoist icons.

The Mien Taoist tradition goes further and also requires a shaman to perform a ceremony that introduces the gods to the paintings. Shamans then display the set of paintings in a certain order to play a part in ceremonies. At other times, they are rolled and stored up in a box hanging near the domestic altar. When a set of paintings is judged worn out, the owner may decide to replace it. A shaman will then perform a ceremony in which he politely invites the gods to depart from the paintings and “go visit somewhere else”. It is these de-consecrated paintings which are usually sold.

This painting is the whole assembly of the Taoist gods and Celestial Worthies, executed in the typical Chinese tradition. The gods are seated in three levels: the Upper, Middle and Lower Tribunes. The Upper Tribune is reserved for the Three Pure Ones, among them the Supreme Jade Emperor, Master of the Stars of the Central Heavens, The Jade Maidens, the Immortal Masters of Magic, the Treasurers of Wealth and Salaries, the Third Lady Empress Chao, the Castigator of diseases, and others.

The hill tribes in the northern areas of Vietnam, Laos, Thailand and Burma use these divination masks during Taoist ceremonies. This is a rare hand painted saa paper mask worn by a Tao Priest (Sip Mien Mien) during Mien rituals. The mask, representing a God in the Taoist pantheon, is actually tied to the forehead of the priest during the ceremony 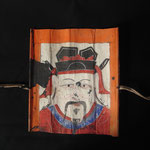 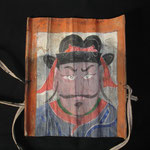